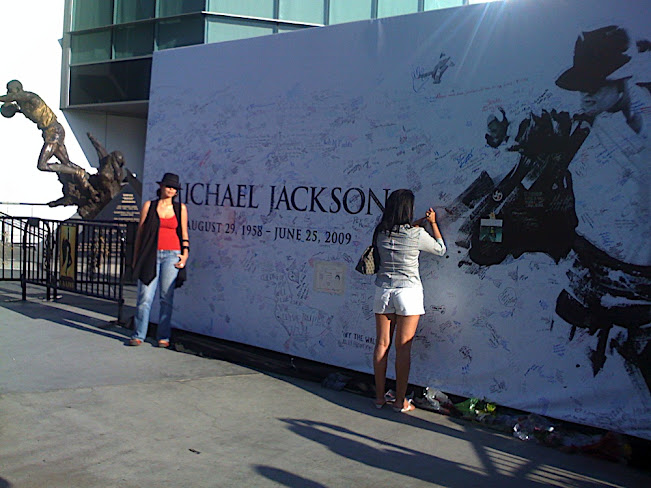 I felt like a small piece of me died. Until that moment, I never realized that there had always been a Michael Jackson dancing somewhere in my soul; an Energizer Bunny that kept me going. Suddenly the moon-walking in my heart stopped, and I was viscerally affected. I wanted to be anywhere but Lansing; I wanted to be in NY at the Apollo Theater or Times Square; I wanted to be in LA at his star on the Walk of Fame; I wanted to be at home in White Plains listening to albums with my mother. I cried and cried and finally managed to fall asleep.

Saturday morning, I arrived at the Lansing airport for my 7:40 flight back to LA. I was trying to avoid the negative commentary that people felt obligated to share in the media. But standing there in this dinky airport, I overheard two men (White) voicing their judgment of Michael Jackson. I clutched my Bible and avoided confronting them. I wanted to ask them, “What have you done for the world?” “How have you changed the lives of billions of people worldwide?” Furthermore, they knew damn well that they owned MJ albums and could attribute some very successful dates to his music. Instead, I walked away and voiced my opinions to the attendant (Not White) at the ticketing counter. He smiled at me and said, “I know.” [tweet]

I spent most of the flight reading the books of Matthew and Mark. When I arrived at LAX, I felt the calm that one can only achieve when returning home. I spent the afternoon playing with Lucky, listening to Michael, and doing work. Sunday night, I watched the first hour of the BET Awards and was touched by several performances including Jamie Foxx’s opening and Ne-Yo’s performance of Lady In My Life. The best line of the show: “I want to thank all the haters for giving me a reason to do it.” Wow T-Pain; so deep, so relevant.

The next week, I went to work, I went to church, and I caught up with my students, all while wearing my black fedora. On Thursday, a week after Michael left us, I made my pilgrimage to Neverland. We intended to camp but it was mostly a stop and go crowd. I touched the gates, reached out to other pilgrims, and headed back to LA.

The next morning, I waited anxiously for the press conference announcing the ticket process for the planned memorial. [tweet] Instead, they announced a worldwide lottery for 8,750 pairs of tickets. I began to reflect on the need for a worldwide lottery when it came to these coveted seats and posted the following:

At this point, the negative coverage of Michael Jackson was seeping into my media system, and I found myself in defense mode. Threats against Michael were threats against me. A friend of a friend responded to the above post with the following: “And child molester. I’m content to remember only the man’s music. Open the door a lil wider and you let in some creepy ghosts.” After exchanges that involved Mos Def quotes and industry credentials, I responded, “What good does remembering his faults do? Tarnish people’s mourning process? And for what?” I felt pretty good about that.

The truth is that people who insist upon judging Michael Jackson at the moment of his death are haters. They don’t necessarily hate Michael Jackson; rather, they hate the fact that millions around the world are rallying to celebrate him. They hate the positivity that these people express because of Michael. They hate that Michael preached a message of love that was heard by audiences worldwide who forgave him for his bad decisions (the only available fact), and continued to welcome him into their homes and their lives [tweet]. The haters’ only goal is to snatch the joy from Michael’s fans and get coverage for themselves. I assume that they do not take pleasure in repeating these horrible accusations. But then again, maybe they do take pleasure in judging others, but that pleasure is rooted in the desire for evil thoughts and actions.

Today, en route to the Staples Center, a man got on my building elevator while I was trying to put on my golden (ticket) bracelet. He clearly saw the excitement on my face as I said, “We’re going to see Michael!” In an act of pure hate, he loudly vocalized a frustration with “the celebration of a pedophile.” I turned to him and said, “He was found not guilty, and Michael did more for children than you ever will!” I felt good about that too.

This is not to say that I understand or can even begin to know Michael Jackson, but all of the accusations and facts are a matter of public record. We know what he was accused of; we know the evidence presented and therefore, there is no need to talk about what you think or believe happened. If it matters what one person thinks and believes about another person they do not know, then allow me to share what I think and believe.

The Media Made Me Crazy
View all posts by charisselpree →
This entry was posted in Blog Posts and tagged Autobiography, Identity, Music. Bookmark the permalink.

1 Response to My Michael