In May, I was honored to accompany a delegation from the Association of Black Psychologists (ABPsi) to Hominis 2016, organized by the Cuban Psychological Society in Havana.

The trip was an amazing! We wandered the streets of Old Havana, marveling at the art, architecture, and music; we drank mojitos and Cuba-libres and rode in classic cars; we learned about the Cuban experience from Cubans, not from the media spin that dominates American understanding of this embargoed community.

But this was not a vacation. We visited a community center that caters to Afro-Cuban women and learned of their unique plight in a country that often claims to be past racism (as does much of the Caribbean); we attended several talks at the conference that addressed international psychology and the changing needs of a majority world perspective, a phrase that I learned at the conference. Majority world “defines the community in terms of what it is, rather than what it lacks” (The Masalai Blog, 2009; Shallwani, 2015), and reminds us of the fact that the majority of the world is of color, “developing,” or in an even more outdated term, “third world.”

The trip was life changing and I am grateful to my former PI, Cheryl Grills, who has bestowed upon me more knowledge than I can even begin to quantify. On my flight back, I sat next to a woman who said that she was excited to visit Cuba, but was waiting for it to get more “touristy.” My immediate response (which I kept to myself : ) was, “You don’t want to go to Cuba, you want to go to Sandals.”

Cuba is “touristy.” Although Americans do not visit and are told that the country is backward, there are tourists from the rest of the world, including Europeans, Asians, Africans, and South Americans. The ethnocentrism of Americans (i.e., United States) has impeded us from increasing our global awareness. The Cuban people were gracious, welcoming, and excited to share their culture with anyone who was willing to visit. Estoy deseando que llegue mi próximo viaje a Cuba! 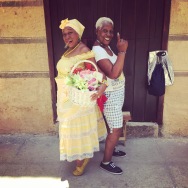 The Media Made Me Crazy
View all posts by charisselpree →
This entry was posted in Blog Posts, Caribbean/South America, Charisse is Cool and tagged Autobiography, Culture, Globalization, Identity, Politics, Psychology, Race. Bookmark the permalink.