WTF is Real Fake News?: The Mashup of Reality and Satire

Posted on February 21, 2017 by charisselpree

We lack a shared reality thereby making it impossible to ridicule the absurdity of reality.

Although the “golden age” of satire may differ for different people (research for golden age of satire focuses on mid 18th century texts), some have argued that the Trump presidency will usher in a golden age of satire due to his over-the-top persona and absurd approach to politics. Given this reality, satirical outlets must step up their game to one-up (or trump) the absurdity of reality. In fact, Trey Parker and Matt Stone have sworn off parodying Trump “because satire has become reality.”

We are clearly in a unique satirical age, although I don’t believe that this is because of Trump, rather Trump and our current satirical environment are both outcomes of a flood of information, one of which we are often ill-prepared to make sense of, and one where  “truthiness” (2005) is the ultimate evidence; things that make us feel good and think less are clearly “right.”

This emotional response is not a new phenomenon (it is the combination of human psychology, the digital and social media environment, and our seemingly pervasive reliance on media for entertainment, information, and habitual use), it still results in a satirical environment that seems to “transcend, fracture, subvert, circumvent, interrogate and disrupt, hijack and appropriate modernity and postmodernity.” In short, we are in a metamodern satirical age.

As someone who was raised on Comedy Central, Adult Swim, Frank Zappa, and SNL, written a Love Letter for Jon Stewart, and taught a course on satire and diversity at Syracuse University, I have observed 5 major trends in the current overlap between satire (i.e., the use of humor, irony, exaggeration, or ridicule to expose and criticize people’s stupidity or vices, particularly in the context of contemporary politics and other topical issues) and reality (i.e., the world or the state of things as they actually exist, as opposed to an idealistic or notional idea of them) that, IMO, do not bode well for us as a collective community.

1. What was once satire is now reality.

Things that we knew to be a joke but commented on much larger structures are now coming to fruition. Consider when Donald Trump as president was a joke on The Simpsons (an established satirical outlet) in 2000. Or when Civil Rights leaders of the 1960s might be considered anti-American and insulted by the president by The Boondocks (an established satirical outlet) in 2006 compared to John Lewis in 2017.

Of course some of the best examples of satire-becoming-true are Network (1976), which predicts the nature of news media in the age of ratings, and the recent selling out of Orwell’s 1984. I also showed The Oblongs (2000-2001) in my class at Syracuse University, where the school is “On the Hill,” and embodies much of the class disparities the show satirizes. It’s always a fun to watch humor become reality for these students.

Every day, I see headlines that seem absurd, but are true; from “Donald Trump announces campaign for president” to “The WH is outraged Dems won’t give Trump’s SCOTUS nominee a chance” (cc: Merrick Garland).  There is a nice collection @ItsNotTheOnion ranging from silly to serious.

There are more instances of satire that simply re-skins or re-voices reality to demonstrate its absurdity. Although this is not a new strategy (see Dave Chappelle’s “Black Bush”, 2005), it is becoming more prevalent. I laughed at Roy Wood Jr.’s “Black Trump: They Love Me” and George Lopez’s “Mexican Trump,” but after the election, I found myself cringing at The Daily Show’s auditions for a Trump Tweet Reader.

Then again, some of the best satire is cringe worthy, because you know it is true, and the truth can often be difficult to laugh at. Consider Larry Wilmore’s routine at the White House Correspondents Dinner or the Opinion Page of the Boston Globe. 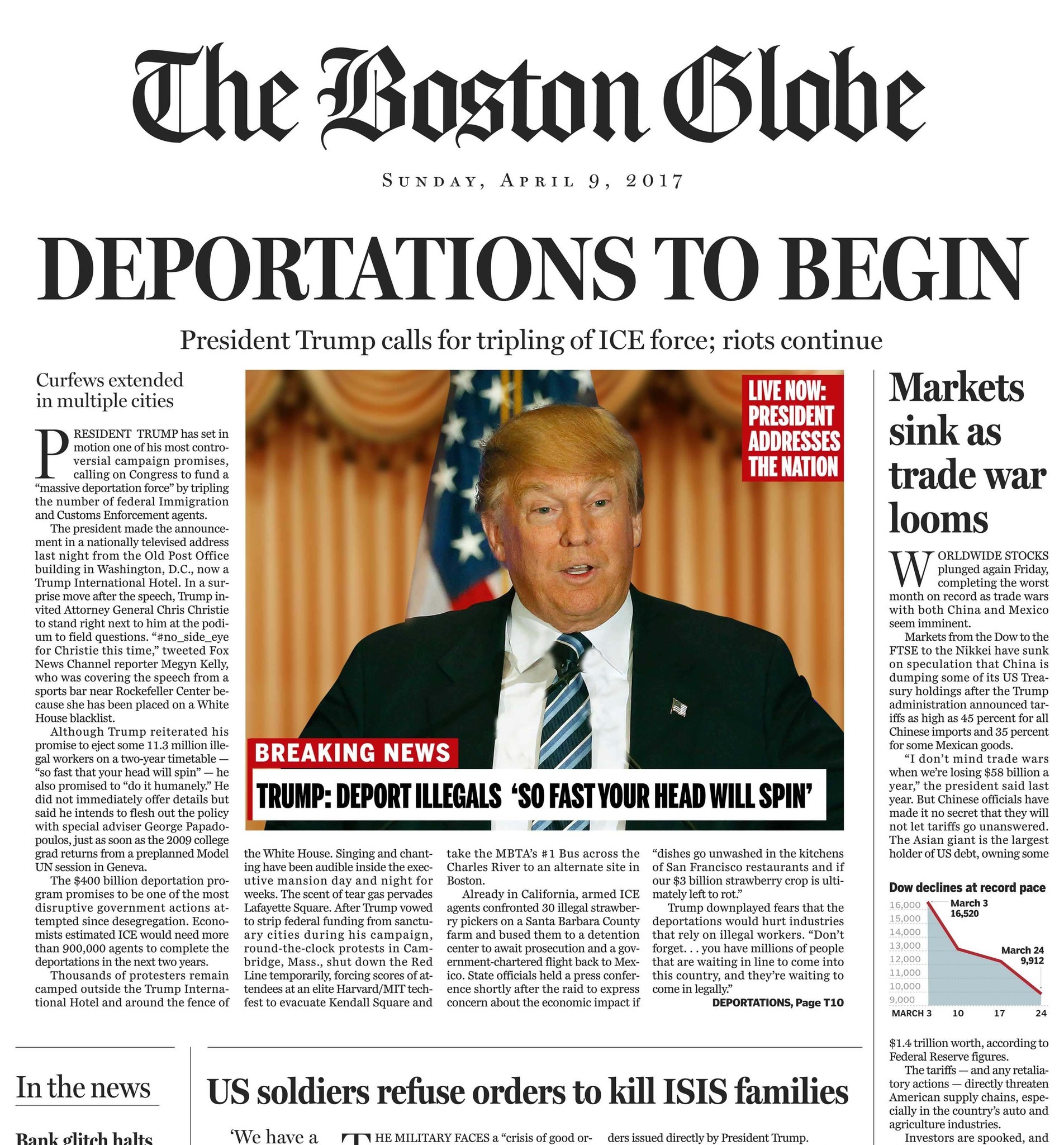 3. Satire is shared as reality.

There is a documented history of the intended message of satire being lost on audiences, consider “Archie Bunker for President” (Vidmar & Rokeach, 1976), or conservatives agreeing with Stephen Colbert on The Colbert Report. Again, this is not a new phenomenon, and in 2005, the unique nature of digital media in this equation was dubbed, “Poe’s Law.” However, in the current environment, this lack of distinction between satire and reality causes people become outraged over satirical headlines regardless of whether or not they understand it to be satire.

Consider a “Public Service Announcement” from the satirical page Big Organic, which parodies the organic food movement as a branded corporate entity, describing the difference between organic and GMO boiled eggs:

The post shared like wildfire among the same people the website is mocking, people eager to demonstrate how food is different without realizing that this is the difference between a properly boiled egg and an over-boiled egg. So many of their followers were frustrated about the misinterpretation by the general population that the page issued a statement defending their satire against what some called “fake news.”

Last week, Don Lemon went viral for shutting down a guest who continued to claim that CNN was fake news (while on CNN), ignoring the definition of the phrase itself, “content that is intentionally meant to deceive.” Although Lemon’s adherence to ethics has made him an industry sweetheart, the guest’s inability to define fake news is problematic because we no longer acknowledge a shared reality. This is furthered by our reliance on digital media for information and the phenomenon of walled gardens: we talk past each other without getting to the core of why we differ.

For years, The Daily Show referred to itself as the best source in “fake news” and other news parody and satirical outlets like This Was The Week That Was (1962-1963) and SNL’s “Weekend Update” embraced the phrase. We once acknowledged that the phrase “fake news” meant “fake [news programming]” and deployed the formatting of news programs (e.g., 3-camera system, insets, headlines) to satirize and comment on the happenings of the day.

Now, “fake news” means deliberately peddling falsehoods as news in order to deceive the audience. For journalists, this is a serious ethical violation, but in a world where journalism is populated by those not trained in journalistic ethics (e.g., pundits, experts, celebrities), intentionally deceiving the audience is just an “oopsie!” (see Bill O’Reilly vs. Brian Williams). The genre that is tasked with providing a shared reality, and to which we turn for an understanding of the world around us, is now a space dominated by entertainment (again, see Network, 1976). But we still internalize and register it as “news.”

5. “Satire” or “Sarcasm” is used as a defense for reality.

For me, this is the most disturbing aspect of our current environment, as it demonstrates that there is no accountability for the things that we say and their implications. We can no longer be bothered to use words appropriately (e.g., feminist, community organizer, microaggression, safe space) and when we cannot have a shared reality, we cannot engage.

Consider President Trump’s (then nominee) comment that Obama and Clinton were the “founders of ISIS.” He demanded, “it’s true,” and handlers defended these statements in the news media; after three days, nominee Trump’s tweet, “Doesn’t anyone get sarcasm?” Thereby denying accountability and the meaning of his words. He threw the entire three days out the window and suddenly the conversation was about how the news media “couldn’t get a joke.”

According to Highet (1962), SATIRE MUST BE ORIGINALLY INTENDED AS SATIRE and there must be some overt or explicit indication to the audience, much like a wink. It is not sufficient to say that something is satire after it has been received poorly. It is important to note that in this argument, the satirist is responsible for including an indication of satire; it is NOT the satirist’s responsibility to ensure that the audience understands the indicator.

Furthermore, when we eradicate meaning as a defensive strategy, and claim that our words didn’t mean what they were taken to mean, we also deride others as hypersensitive when they call us out: “Don’t be so sensitive.” “It’s just a joke.” This lack of shared reality is perpetuated by refusing to acknowledge the implications of language. This quickly devolves such that those who are holding people accountable for their statements are accused of “stifling free speech,” which also demonstrates a lack of understanding of what  “free speech” means.

In short, I don’t know what is coming, but given our inability to agree on reality, the sources of reality, or the meaning of the words that we use to describe reality, then reality itself is absurd.

The most frustrating part about this overlap is the fact that I don’t know when something is satire and when it is stupid. I find myself going down a cognitive rabbit hole every time I see something that is offensive or absurd. Does Tomi Lahren really believe the things she spews, or is she taking us all for a ride? Was the person who originally photoshopped Obama’s hand onto Melania Trump’s backside doing it as a joke but became real fake news? Did South Park predict that our downfall would come from a lack of distinction between satire and trolling? Is Andy Kaufmann really dead?

Either way, this mashup of reality and satire foreshadows a societal implosion; not necessarily a collapse of society, but a dystopian hellscape is a type of society… right?

The Media Made Me Crazy
View all posts by charisselpree →
This entry was posted in Blog Posts, Charisse is Cool, Everyone's a Critic, Satire, Television and tagged Art, Culture, In the Classroom, Media, Politics, Psychology. Bookmark the permalink.

1 Response to WTF is Real Fake News?: The Mashup of Reality and Satire