Posted on April 2, 2019 by charisselpree

We lost an icon today. I lost a sister, a mentor, and a hero. I’m just grateful I got to share some of my happiest and proudest moments with the incomparable Lorraine Branham. 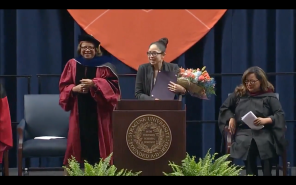 Professor of the Year! Spring 2017 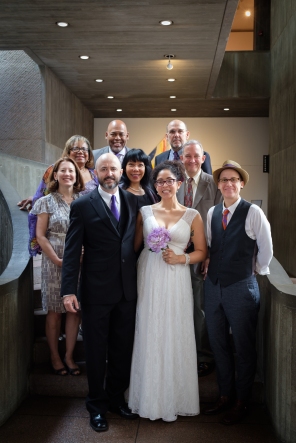 At the Everson October 2017 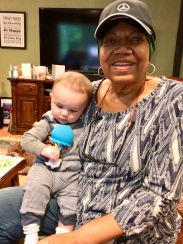 Last year, I sat down with Samuel Lee, VIS ’19, to discuss Lorraine’s career and what she means to me and to Newhouse…

“I’m the oldest of nine, I’m used to telling people what to do” said Lorraine Branham in an interview on Monday. Branham is the dean of the S.I. Newhouse School of Public Communications. Which was ranked as the top communications school in the US, by Newspro Magazine, in 2011.

Branham is the first woman of color to hold the position of dean at the Newhouse School, and one of the few to lead a top communications school. In a USA Today list of the top 10 journalism schools in the U.S., Branham is one of three women, and the only person of color in the list. In the ten years since her appointment, Branham has made diversity a priority. “I feel fortunate that I have a faculty here that really cares about those issues, I don’t have to bang my head against the wall to make happen.” Still, Branham’s faculty is not as diverse as she wants.

Christal Johnson, an associate professor of Public Relations, is one of Branham’s recent hires and is African American. “I think Dean Branham does a wonderful job of emphasizing diverse people and programs, however it is up to the rest of Newhouse to run with it.”

One of the instructors of the diversity requirement courses is Charisse L’Pree. An assistant professor of communications and media studies, who studied at Massachusetts Institute of Technology and the University of Sothern California, L’Pree feels that Newhouse faculty still has lengths to go. “I’ve definitely heard a colleague say ‘Oh we don’t have racism at Newhouse because we have a Black woman dean’” said L’Pree “and that’s heartbreaking to me, that someone could use her figure to disregard what needs to get done.” L’Pree’s areas of interest and study are based diversity, and one of the classes she teaches is structured around race, gender and diversity in the media.

“When I was hired, I was the only black woman faculty member, and I had students coming to me, crying to me about what students and faculty had said to them.” L’Pree referred to this as invisible labor. “I have less of that now, that kind of labor is being distributed across multiple female faculty of color.” Nationally, under 20% of the professors in the U.S. are made up of non-whites, per a 2008 study conducted by the the National Center for Education Statistics.

Challenges that women of color face in the workplace are not only matters of invisible labor, but also in the fact that they may be seen as a representative for people of color that may come after them. “My entire career, I’ve been either the first woman or the first woman of color in almost every job I have ever had” said Branham “It’s always made me work extra hard at everything I do.”

Both Johnson and L’Pree recognized and reiterated these feelings. “People say ‘Oh there’s a black woman and she happens to be successful” said Johnson “because people compartmentalize us, and we as women of color have to deal with stereotypes that have been perpetuated. We want to be recognized as women of color and for our successes, but in an integrated way.”

“Growing up, my mother had a sign that read ‘As a woman you have to work twice as hard to be half as good’, and that adage has been ingrained in me,” said L’Pree, who is of Caribbean, Chinese, and Guyanese descent, “It can be about the work you actually have to do, or it can be this extra invisible labor that you’re not getting paid for.”

Branham’s position of power is a source of privilege, says L’Pree “When Dean Branham says something, it’s Boss Lady saying it.”

Prior to her appointment as dean of the Newhouse School, Branham was director of the School of Journalism and G.B. Dealey Regents Professor at the University of Texas at Austin, she also was the senior vice president and executive editor of the Tallahassee Democrat and was a reporter. “I became an editor because I really wanted to have more influence over the paper…I felt that I could help my paper be better by being one of the people sitting around the table, making those decisions.” said Branham. “Part of the reason I became an editor was because I would look in the pages of the paper I worked for, and I wouldn’t see the communities I was a part of reflected there.”

As a dean, editor, and journalist, Branham has left a mark. “We need to tell the stories of everyone in our communities, and we should be a mirror on society” said Branham “If we are going to be this great piece of our democratic society, then we have to make sure we are doing a good job of telling the story of everyone in America.”

The Media Made Me Crazy
View all posts by charisselpree →
This entry was posted in Blog Posts. Bookmark the permalink.